Nov. 9th, 2016 — thousands of people across America take to the streets to protest Trump’s victory over Hillary Clinton in the US presidential election. CNN, MSNBC, The Young Turks, The New York Times, FiveThirtyEight all with somber faces declare Trump to be the winner. Twitter and Facebook erupt with #NotMyPresident and the phrase “literally shaking” starts to trend. CBS depicts the thousands at the Hillary Clinton viewing party, all with sad faces, some crying, and others leaving. Meanwhile, an assistant pours Alex Jones another glass of champagne on national TV.

The calm before the storm

Let’s roll time back a few days. Nearly all the polls showed Clinton ahead, and whatever results depicted a Trump lead were tools of the alt-right and unscientific. The USC/LATimes poll was just a tools for measuring trends in voter preferences, and the IBD poll was funded by Republicans, and so should obviously be discredited.

RealClearPolitics shows only one poll predicting Trump to win the nomination

And they were all wrong. America has proven itself to be more misogynistic, racist, and bigoted than anyone could have predicted it to be. We were all wrong. Literally Hitler had been elected into office.

Keijo!!!!!!!! made its debut on Oct. 6, 2016. In the anime, Keijo is a fictional sport where scantily clad women attempt to push each other off floating platforms in a pool using nothing but their (very well animated and detailed) breasts and bums. Keijo!!!!!!!! tells the story of one girl, *Kaminashi Nozomi, a 17 year old aspiring gymnast who has one goal: to become the richest Keijo athlete in the world. While we can simply write this anime off as just another misogynistic and deplorable attempt to objectify women, the true objective of *Keijo!!!!!!!! is far more sinister. Some of the most racist and sexist states (Georgia, Mississippi, and Trump’s home state of New York) make up *Keijo!!!!!!!!’s largest audiences.*

The anime is available on the streaming service Crunchyroll in subtitled form only, and even if you don’t understand Japanese you’ll recognize that Kaminashi’s voice sounds out of the ordinary when in conversation with her fellow classmates. The Kansai accent is understood among anime aficionados to be a dialect used by hillbillies and the uneducated and Kaminashi sports her accent loudly and proudly. She’s unapologetic and unreserved about her brash manners and rural upbringing, unaware of the systemically racist mindset that she grew up with.

Who watches this crap?

Who is Keijo!!!!!!!! meant for? Some might say that it’s a show where guys get to perv on teenage anime girls (a concept deplorable by its own right). Advocates attempt to justify the existence of such a tasteless piece of garbage by claiming that Keijo!!!!!!!! represents feminism as it not only features a strong independent young woman who has her own dreams and inspirations, but passes the Bechdel test easily and with flying colors.

'Keijo' offers something many TV series and movies do not: a passing grade on the Bechdel test. via @William__Hicks https://t.co/MPhGkhrRVv

But are these really women who are interacting with women? How can such a sexist anime pass the Bechdel test, the paragon of litmus tests for feminist literature? Rural White Males show their support for a racist bigot

And that is who Kaminashi Nozomi is. Keijo is not a sport where losers are treated well. It’s a sport where one quite literally sinks everyone else to be at the top. Other ‘girls’ in Keijo!!!!!!!! have dreams. They have aspirations. They have goals in life. Kaminashi’s goal? To get the money, regardless of the ambitions of others. Kaminashi is not a woman. She’s a deplorable — a White Male.

Keijo!!!!!!!!’s main character is a bold signal to those on the alt-right. Do whatever you want to get to the top. Ujibe-sensei (middle) sports a shirt with the symbol of 4chan, host to the infamous neo-Nazi forum /pol/ — politically incorrect, sending a direct message to the alt-right for bigotry and racism

In fact, upon closer examination, Kaminashi appears to be Donald Trump. From the beginning, the press were all calling her a nobody. She was shunned and said to be of no importance. Reporters called her success a stroke of luck. Others laughed at her. She’s rude, uneducated, arrogant, and braggadocious.

Remember, Huffington Post had Trump polling at less than 1% for the Republican nomination in 2015.

Kaminashi serves as a reminder to all White Males —it’s okay to push other people off the platform for personal gain. As long as you win in the end, that is. Do whatever you want.

This Pepe the Frog meme, a tool of the alt-right, illustrates how men will do anything to achieve their sexist goals

Throughout Keijo!!!!!!!!, Kaminashi stresses the importance of defeating those more Elite than her. But who are the Elites?

Kawai from the Elite Class mentions how she prefers being “with the common people” rather than her smug group of stuck-ups.

Until you overthrow the Elite, that is. Then you’ll be a force of good again.

Donald Trump wants to Drain The Swamp, only to replace it with his own ilk.

Just like Donald, Kaminashi attempts to push the Liberal Elites off their golden pedestals by replacing them with the students from the regular class. You are led to believe that somehow, these Regular People would be more moral, more correct, more just than the evil, evil Liberal Elites that run the institution. You, who has been brainwashed into identifying with these Regular People, believe that even if you regress back into the position of a Liberal Elite you’ll still be a more honest and ethical person than anyone else. No, you are more honest and ethical because you took this journey. 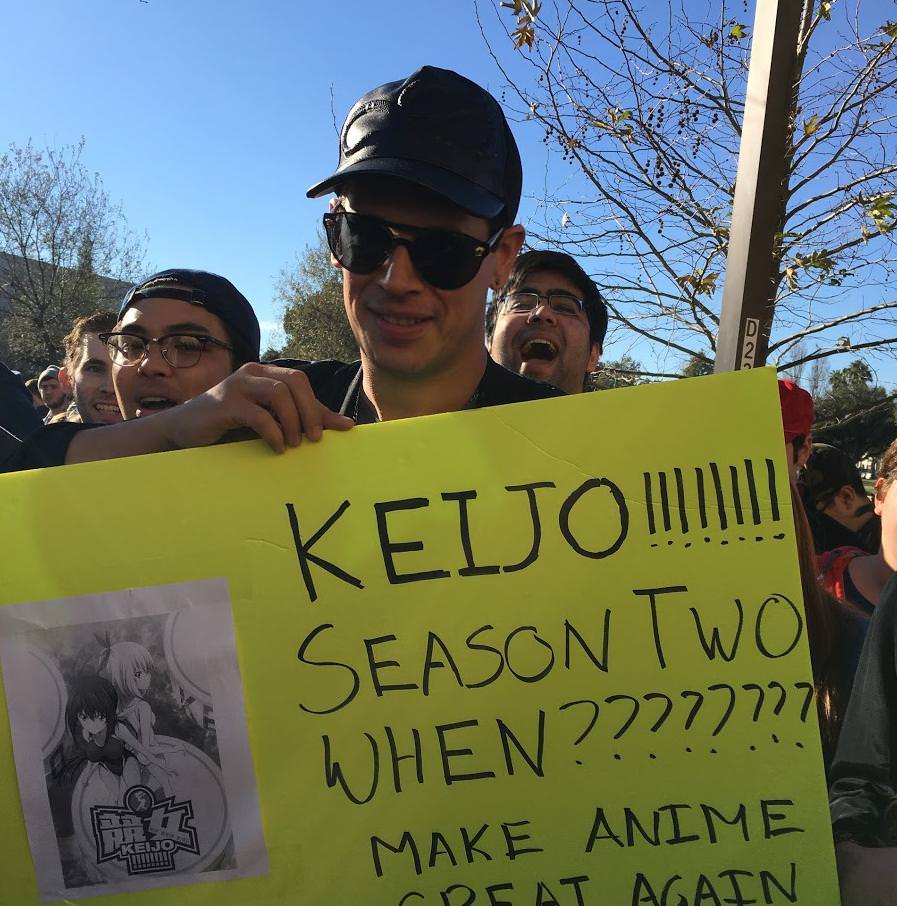 As of January 2016, Crunchyroll had over 20 million accounts. Over 75% of their viewers are millennials, the voters Hillary desperately tried to win over. Keijo!!!!!!!! is one of their most popular shows this Fall anime season. With such a small difference in the popular vote in certain battleground states, a piece of propaganda such as *Keijo!!!!!!!! could have changed the winner of the election.*

Unfortunately it will be impossible to know.

There’s only one thing we can do as proper citizens of America who are against Islamophobia, homophobia, bigotry, fascism, and quite literally Nazis.

Spread the word out. Retweet this article. Share it to your social justice minded friends. Go write to your representative today and ask them to ban Keijo!!!!!!!! from the internet in your state today. Contact Crunchyroll and tell them that this sort of bigotry will not be permitted in this country.